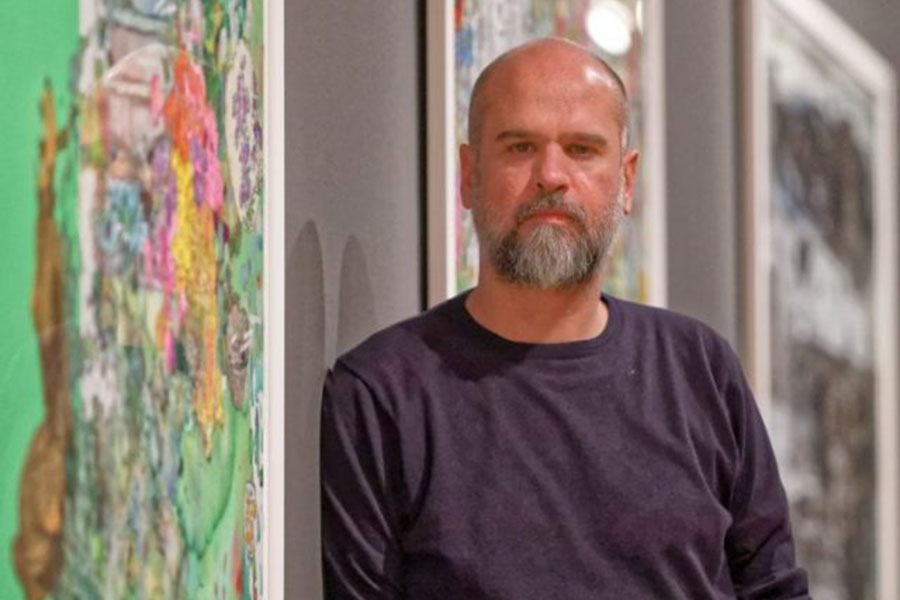 After three obsessive and lonely years, during which I worked every day on my own visual interpretation of the album No More Shall We Part by Nick Cave & The Bad Seeds, I saw the paintings created during that time coming out of my studio and being exhibited in Athens, at the Benaki Museum, last April and May.

The album «No More Shall We Part» has had a strong impact and influence on my personal life, as well as my artistic development, since 2001, when it was released. At the time, trying to save a relationship that had already collapsed, and looking for satisfactory answers to various existential questions which very often still trouble me, I felt I identified with the basic concepts that this album is about, God and Love. At the same time, I envisioned a painting for each song. As a post-graduate student in London, back then, I had attempted to transfigure the song The Sorrowful Wife into an image, in one of my first woodcuts. There I first carved the opening line from the song, I married my wife on the day of the eclipse, which may encompass the album’s basic concept.

A long time after my first hearing of «No More Shall We Part», I knew that the images that formed inside me when I first heard the songs of that album were still with me. And so, in 2015, more mature artistically, I decided that, for as long as it took, I would commit myself fully to the materialisation of an idea I had been developing for years: my aim was to attempt an entirely personal visual approach of «No More Shall We Part», creating fourteen paintings inspired by the fourteen tracks of the album – the original twelve songs and the two b-sides that were included in the limited edition release. Subsequently, I would very carefully transplant those works, along with the embroidery crafted by Antiopi Pantazi, a large triptych and two silk screens, into an art book, which I would edit myself for publication.

Never for a moment had I imagined, when the album was released, that such an exhibition would actually take place, but I had been dreaming about it all these years. The number of visitors and the reactions to the opening and the concert at the museum’s patio, as well as during the exhibition, were really moving. From October 2017 until June 2018 I had the good fortune and honor of working with Manolis and Chrysanthos Agelakis, of the renowned Tind silkscreen atelier, creating and recomposing from scratch two of the 14 paintings/songs of the project, using the silkscreen printing technique: “Darker WithThe Day” and “And No More Shall We Part”. During this creative process, some more works emerged, which played an important role in the final imagery of the exhibition, the publication and the project.

One of the first people who were made privy to my plan before I set out to implement it was Jim Sclavunos, someone I have always appreciated deeply as a person and as an artist – regardless and irrespective of his concurrent capacity as a permanent member of the Bad Seeds. I find it difficult to express with the requisite accuracy what a great stroke of luck and honour it is for me that Sclavunos became a friend who, in an unaffected and uninhibited way, helped me delve deeper into a universe that seemed to me at once familiar and inaccessible, leaving enough space for me to develop without distractions my own, autonomous artistic vision. Always unobtrusive, observing the right balances, respectful of my circumstances and understanding my sincere intentions, Sclavunos played a decisive role in the implementation of the project, and certainly in the relationship that developed over the years between me and Cave.

The most important and essential part of the closer relation that developed between us in the last few years is that this collaboration is no collaboration. When I shared the idea with him, he was immediately willing to support it, as he already knew and appreciated my work. But at no time, in the three years that I dedicated to working the paintings based on his songs, did he attempt to intervene, interpreting the meaning of the lyrics or suggesting some particular approach to the songs. I had decided right from the start that the whole creative process would go through my own personal gaze, my own interpretation and my own experiences. This brought us even closer, as gradually our common aesthetic sense our common concerns and the common themes in our work emerged in front of our eyes.

People often ask me how I first met Nick Cave, so I quote here the first and last paragraphs from the introductory note I wrote for the art book:

I first met Nick Cave in 1997 in London. He had just finished a concert to promote the «Boatman’s Call» album, and I, urged by an intense desire to meet him in person, stood outside Royal Albert Hall, waiting for him to come out the front door. Which is what eventually happened.

And now that the work has taken shape, now that my artistic endeavor is complete and its outcome irreversible, I can see, I think, a little more clearly what it’s all about. It is certainly a tribute to the album that has –together with its creator– left an indelible mark on my personal and artistic development. At the same time, it indicates my conclusive confrontation with this weighty unfinished business, which enshrouded within it so much more unfinished business and frustration. Ultimately, though, it also comprises my own personal proposition for the potential development of a dialectical relation between two art forms –painting and songwriting– which have always formed the core of my artistic and creative expression.

«You know what?» Cave told me as he leaned closer to look at my work for his song Grief Came Riding. «This exact image you have painted, with the same colours and the same atmosphere, was the one I was seeing when I wrote this song. I was feeling the same emotions. The only difference is that, while I was standing on the same bank, I was looking at the bridge from a different angle».

More info for the artist:
https://www.stefanosrokos.gr/