Skip the Bordeaux, Go for the Assyrtiko

On March 15, the chef, Nicholas Poulmentis, will proudly, though nervously, open the doors of Akrotiri, his new restaurant in Astoria, cooking dishes normally not found on a Greek menu, and serving wines most people have never heard of.

“My fear is that people don’t know Greek wines,” Mr. Poulmentis said. “But I feel if they try it, they will love it. I’m very afraid, but I hope people understand.”

In an attempt to introduce Greek wine to the palates of New Yorkers, Mr. Poulmentis and the restaurant’s owner, Chris Kouvaros, have teamed with importers to build a wine list to go with the eclectic menu at Akrotiri. On a recent weeknight, they gathered at the restaurant with eight people to try to match wines to Mr. Poulmentis’s bold flavors. 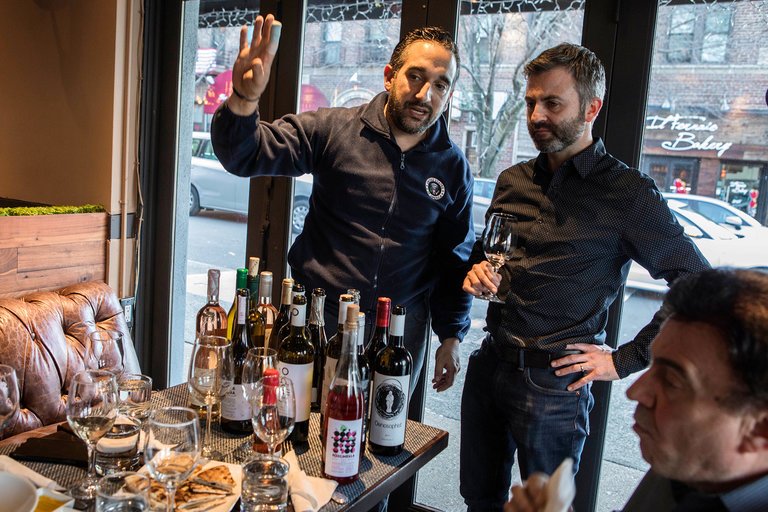 Over a week, they would narrow the selection down to about 20 wines — including a few French and American labels for those unwilling to go Greek. As the restaurant grows, they hope to expand the list.

Jason Wagner, the wine director at Union Square Cafe, said that one reason New York restaurants don’t carry many Greek wines is that they are often hard to pronounce. “People get intimidated by wine,” Mr. Wagner said. “So if you have something with a totally different alphabet, even Anglicized, it’s a little scary for people to order it.”

Recently, New York diners have become more familiar with some Greek grapes, like assyrtiko. “You’ll continue to see more and more Greek wines, but there are hurdles,” he said.

To complement Mr. Poulmentis’s exotic ingredients, three wine experts were on hand at the tasting to test 10 bottles against the mostly seafood dishes rapidly coming out of the kitchen. Running back and forth between stove and table, Mr. Poulmentis excitedly described the ingredients, saying more than once, hands pressed to his chest: “You are eating my heart. This is made with my heart.”

For starters, there was a seaweed-like plant called kritamo, plentiful on the island of Ikaria, volvi onions from Crete (pickled with balsamic vinegar) and sliced charcoal-grilled octopus over black-eyed peas. A black taramosalata (caviar spread) made with herring roe, truffles and squid ink, was tart, delicious and unlike anything anyone at the table had ever tasted. Meeting it head on was a big pour of Theon Dora, an organic white wine from Crete which means “God’s gifts.”

The wine is from a small grower with only three hectares (about 7.5 acres), said Aris Soultanos, an importer whose company, Eklektikon, specializes in Greek natural wines. “This is an explosive wine with high acidity and high alcohol,” he said. “Chef Niko’s recipes have a lot of emotion in them, so we want to choose wines that have a big personality and a clear sense of place.”

The chef explained that even the thick, crusty honeycombed bread he was serving (made with a yellow flour from the island of Lemnos) was not something you find in America — not even in the Greek places in Astoria. With a quick flourish, Mr. Soultanos pulled out a Terra Ambera, a natural wine from Lemnos made from white muscat grapes. The flavor was flowery, like a mouthful of roses.

“I’m in love with this wine,” Mr. Poulmentis said. “It’s beautiful.” The small crowd agreed and drained their glasses. Mr. Soultanos explained that it’s an orange wine, from white grapes but made like a red wine, with skin intact, the tannins producing the more robust, spicy flavor.

Mr. Soultanos and his business partner Maria Bakalopoulou had worked with Mr. Poulmentis at Theo’s Restaurant and Oyster Bar, his former gig on the Upper East Side, and though they hadn’t tasted any of the new dishes before, they knew what to expect. Mr. Poulmentis has hosted a cooking show on Greek cable, NGTV, and cooked at the White House as a guest chef for President Barack Obama in 2012.

“Especially when someone is setting up a new restaurant, we have to work the wine list from scratch,” Ms. Bakalopoulou said. “Niko trusts us. And we believe in him.”

Dishes sampled that day included a tuna tartare, enlivened with the small green seeds of the unusual finger lime, which pop in your mouth like citrus-flavored caviar when bitten. Smoked mackerel with bulgur and tiny red peppers known as sweety drops — was smokey and salty, and like a risotto, but served cold. The dish was matched by a white from Santorini that one of the other experts, Brian McCoy of Verity Wine, suggested, and a light retsina, with traces of pine resin.

Though the Greeks have one of the longest winemaking histories in Europe, few restaurants carry Greek wines simply because they’re unfamiliar with them. The chef and importers said they want to change that by showing off the different regions of Greece, the different grapes and different soils, as well as the varied climates.

Reds — to go with chargrilled lamb chops — included one simply called Sun from the foothills of Mount Agrafa, as well as a bottle of Staphylus from Macedonia. Swordfish and branzino were paired with a more mild white Oenosophist, from Drama in the north.

With the bulk of his cooking done, Mr. Poulmentis emerged from the kitchen, finally sat down and enthusiastically reached for an empty wine glass. It exploded in his hand, but miraculously didn’t draw any blood.

The small crowd cheered “Opa!” and raised their own glasses.

Then it was time for dessert: baklava made with butter from Corfu sheep as well as slices of a semifreddo-like log called mosaiko, made with cocoa butter and brandy. Last were small bottles of a sparkling rosé dessert wine called Melanthia, which was made with grapes from the southern slopes of Mt. Olympus, known for cool evening breezes.

“I don’t like this dessert wine,” the chef said. Everyone froze. But he smiled, threw his hands up and yelled: “I don’t like it. I love it! I can’t explain how much I love it. I have no words.”

We use cookies to ensure that we give you the best experience on our website. If you continue to use this site we will assume that you are happy with it.Ok